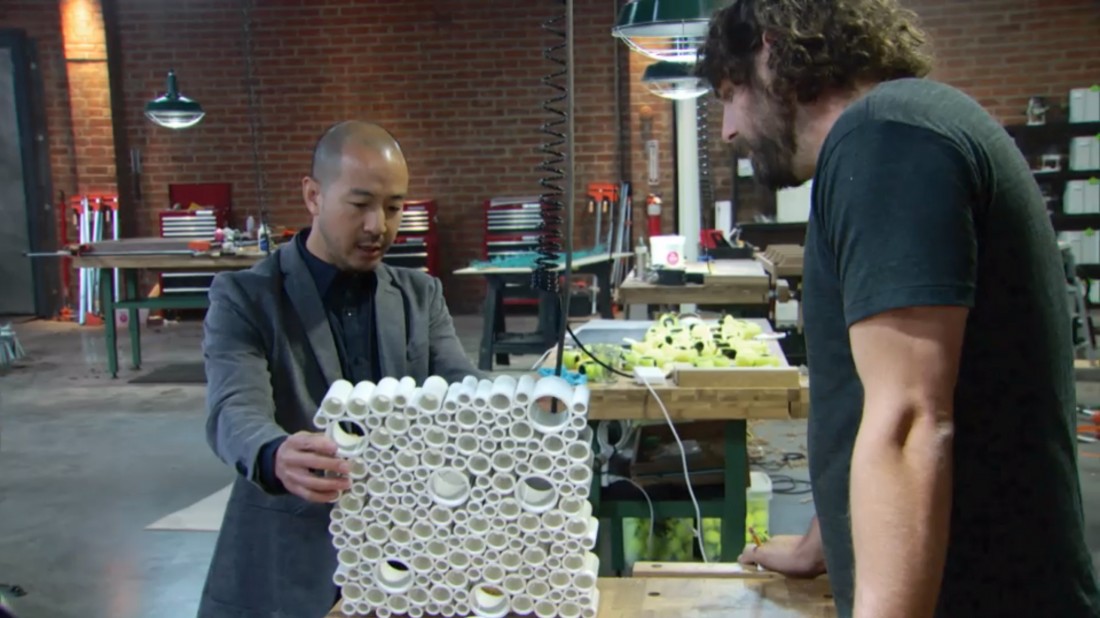 After coming off another fiercely mediocre build with a partner that I was fairly certain was going to kill me in my sleep I was looking for redemption. When I walked into the shop I was excited to see all the different “building” materials and was thinking to myself that this really levels the playing field. The challenge was Adaptability and I was assigned PVC pipe which Freddy called “cake” in terms of building ease. Secretly I wanted the forks and i don’t know why.

Design and Concept:  I had originally drawn 4 sketches and only one of which was a table (as part of a dining set) contrary to what was shown on TV. I had drawn everything from a chaise lounge to different styles of bistro table and chair sets. I thought that I could heat bend the pipe and laminate the pieces together and create solid structures. I also doodled the pattern of the table top that was used in my final piece and that’s what Brandon was more drawn to and said I should go more with that in something, but not necessarily a table. Did you notice my little doodle of Brandon? I think it was around 7:37. I requested a heat bender, PVC cement, and 1×4 solid PVC boards from production staff. I did not want to order and PVC fittings or connectors and be tempted to use them. To me, if i were to use the fittings, any piece that i made would look like your most basis DIY furniture and I wanted to stay clear of anything like that. It’s time to think outside the box with this one.

Build Days: I received my cement from the staff, but my heat bender was hard to find.  I spent a few hours on the computer researching all of LA county and surrounding areas for any rental place that carried it. Finally I did find one on the outskirts the the county, maybe even further than that, and requested it. In the mean time I would spend hours cutting 2″ sections of the various diameter pipe for use on the geometric pattern tops that were originally going to be chair seats for a bistro set. The 1×4 PVC trim board was nearly impossible to find in LA. I kept telling the production staff that it’s available at Home Depot and even told them what section, but they still couldn’t find it and had to scrap ideas for using that. I realized later that in California a large percentage of homes are stucco or use natural wood, where as back home using PVC trim boards on the exteriors was more common. At almost the end of the first build day my heat bender arrived personally picked up by the challenge coordinator himself. I got right to experimenting with it. I bent several pieces gracefully around a form and attempted to glue them together side by side. Fail. There is just not enough surface area for glue on circular pipe. Back to the drawing board. I spent more time on the computer researching how to join the sections of pipe edge to edge with no results. I experimented relentlessly to no avail, so I went back to plan C or D with the geometric pattern top. Since these were short little pieces glueing them was simple and I was pleased where this was going, but where was it going? This is when Nolen came by and inspected my progress. I told him I felt like I was on the verge of doing something great, but I keep getting stymied along the way. He thought the patterns were interesting and that I was using the material in the spirt of the challenge and not just applying to something. Once again i’m back to square one. I went to the shop and milled out some lumber to make a table base from and even joined all the pieces together, but something didn’t feel right about it. Back to the drawing board again. I tried hard to just calm down, not to panic and let the ideas manifest themselves. I marinated for a few hours (build time nearing completion) and ultimately came up with the idea for the coil spring. At this point i’m grasping at straws, but at least it’s not 4 straight PVC legs. I heat up a length of pipe and used the clear tube that Garrett’s tennis balls came in and made my coil. I experimented a few times, but i finally got a consistent coil and at the height i needed. i was surprised at how springy it actually was. So now the competition is in it’s final hours and i’m pretty much at where i was on the first build day. I take the coil and try to figure out how to attach it to the patterned top like a craftsman would. I can find no clever or appropriate way to attach it so I reluctantly used hemp twine. The piece is finished, I am devastated by the end result. All my ideas never came to fruition.

Judgement Day: I went into the critique knowing that my piece was a failure. When standing in front of the judges I actually gave a 2-4 minute speech on how I couldn’t even begin to defend my piece, that it was a failure, that i took a big risk and it didn’t work out. I explained that I could’ve easily stuck four straight PVC legs on it and called it a table, but I would’ve been blasted for that, being called an amateur. It was one of those situations where you’re damned if you do and damned it you don’t and I would’ve rather presented something that was outside the box thinking than something that was expected and if I fail because of it, then so be it. I made this speech before the judges even said anything. Brandon was actually kind of impressed by it and commented to Nolen that he had more respect for me now than he ever did. As it turns out, I was on the chopping block with BK and Rahil. I was told that if I wanted to stay that I should fight for it. In my mind “fighting” for it meant throwing the two other guys under then bus and it wasn’t in my nature to do that, especially since my piece was a failure. BK did use duct tape on his which is a cringe worthy offense and Rahil’s piece was just as bad as mine, but the kid had a lot of drive and spirit to want to be there and had a lot to prove. It would have been easy to rag on Rahil because everyone else did, but I’ve been there too. I’ve been that young guy trying to make a break in the business. I’ve been that guy that people made fun of and if saving myself meant that I would have to do that to someone else, no thank you. I’ve grown as a person and I didn’t want to embarrass myself or my family on national TV by being an ass. The judges asked why I should be there and I answered that I felt that my potential as a maker hasn’t been seen yet and that I only wanted to be there if they truly believed in me and my abilities. I said “I’m a man and I won’t die on my fucking knees”. They also asked if I was serious about being there and by that point I knew it was over for me so i decided to have a little fun. I responded “honestly, i was hoping this show would launch my rap career”. Common looked at me and said “Let’s hear it”. After spitting some dope rhymes Common shakes his head and says “Oh my gawd”. I was really pissed that didn’t make the edit. Brandon stuck by me by not voting me off, but alas the other two did.

I was disappointed in myself, but also relieved that I didn’t go out being judged on my woodworking. I felt that I had let a lot of people down. I carried with me the hopes and dreams of people from back home to make something big of myself in front of a national audience. I felt that I let down the production staff and the casting agent that pitched me to the network. My performance on the show was certainly not how I auditioned. I auditioned really loud, funny and vocal, but being around people like Wesley I took a back seat and just admired the dazzling floor show that is him. Even in real life you can’t get a word in edgewise with that guy, but i love him to death. I’m used to being a big personality amongst my friends and family, but when you’re cast with multiple big personalities sometimes you just gotta sit back and enjoy it. I had a feeling that if I would’ve fought then i might have stayed. I also have a feeling that if I had stayed they would’ve paired me up with Curtis again on the next challenge to try to get me to a breaking point. So while it didn’t make good television I felt that i went out with class and I’m okay with that. $100,000 would’ve been great, but I walked away with something better than all the money in the world; best friends. Friends that I can call or text any hour of the day and they’ll actually respond, friends that I can visit and they’ll visit me, and friends that just get what it’s like being a young, single entrepreneur trying to make it. There’s not a day that’s gone by where I don’t think of those guys and the times we had. I was hoping to gain a little more attention back home when the show aired, but every media except for the Courier-Journal gave me the cold shoulder, and even then it was a little blurb at the bottom of the page. Unless you’re a chef in this town or you pay a PR rep, no one really cares.

On AD/HD: Ok, first off, i’ve NEVER used this as an excuse for anything or do I ever talk about it seriously. I joke about having it, just making light of the situation. The reason you heard me talk about it on TV is because it was my “story” as lame as it is, because I guess my normal life isn’t very interesting. I was mortified when I heard the words come out of my mouth on TV and even more embarrassed that it makes me look and sound retarded. In reality, I just have trouble reading. I didn’t ride the short bus to school, I took classes with all the normal kids in school with no special treatment, I excelled in subjects that I found interest in (Statistical Analysis, Research Psychology, German language and Functional Design) and even have published research in psychology that I conducted in college. I dealt with the condition my whole life not knowing any different. I was diagnosed in college, prescribed medicine that works about 50% of the time and went on to live life as always.

So I get asked all the time if I would do it all over again. Hell yes. As hard as it was, i know now what i’m getting into. I guess my small town naiveté was a disadvantage in the competition, but I’m done looking back and just moving forward. I have serious doubts that they’d even ask me to return for another season, but i’d definitely jump at the opportunity again just like i did the first time. The bigger the risk, the bigger the reward.