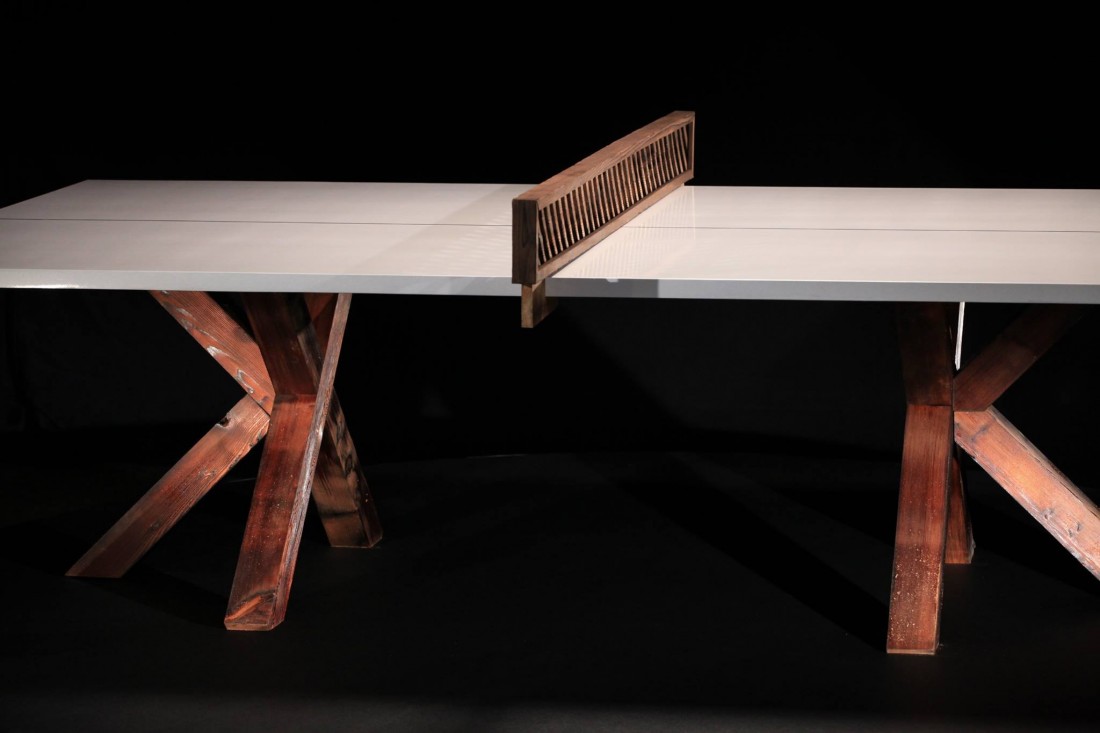 After coming off of a lack luster first episode I was very excited when I learned we were going to the Spin Club at the Standard Hotel for our next build. I absolutely love playing ping pong, so much in fact that it almost cost me my girlfriend in college because i played so much. I wanted to really show off what i could really do with this build since the judges (or myself) were very impressed with my first project. I wanted to stand out from everybody else and really spotlight what i could do behind a spray gun, so i chose Lexus Starlight Pearl White for the top color. I’ve always played ping pong with an orange ball so the color didn’t affect my potential play. For the base i chose to do an interpretation of  my  x-brace trestle, but give it two more legs and finish it with the traditional Japanese technique of Sho Sugi Bahn, a method of charring cedar for the purpose of fireproofing. For the net, i originally drew out a swiss cheese pattern, but was letting “better” ideas marinate. When i presented my ideas to the judges, they were supportive and encouraging. I explained i wanted to make a “bling-pong” table…of course it didn’t make the edit. It is important to note that i designed and budgeted this piece for me to do alone.

Freddy teamed me up with Curtis, whom i had no problem with except for that he sang in the van at 6:15am every morning on the way to the set. I didn’t see his concept, but after seeing it on TV, well judge for yourself. We met back at the shop and he said he wanted to go full on with my design and i must admit i was pretty stoked. I did, however, ask for his input on a net design. We talked it over and decided that it needed to reflect more of the base (having an x pattern). We decided to divide and conquer. I would handle the top, body work and paint and he would handle the base and possibly the net doing some sliding dovetail sockets to attach it. He seemed pretty enthusiastic about doing the base all with hand joinery and what not and told him he could torch it all if he wanted to. I was pretty excited to be working with a partner. I was never more wrong.

Build day 1. For most of the day we were waiting on our materials to show up, that’s when you saw me on the computer, but you didn’t see Curtis building shop fixtures for the other cast members. What was i doing on the computer? In LA they are not allowed to sell my DuPont Chromabase paint systems so i was researching alternatives which would be easy for a professional body man, but in a time conscious competition i wanted to make sure i understood the ins and outs of the product i was buying (Valspar Auto). We had to settle on (2x) 5’x10′ sheets of 3/4″ MDF and laminate them together because the 1-1/2″ thickness wasn’t available without special order. The cedar posts were still trying to be located by production staff. With Curtis’ help we laminated the two sheets together and watched glue dry. His posts showed up later in the day and he got to work milling them while I cut and did the body work to the top in preparation for paint in the morning. I told Curtis that i would have to start painting early in the morning because of the heat and sunlight. The spray “booth” was nothing more than an open top area with four walls and come noon i would be fighting direct sunlight and 100 degree temperatures.

Build Day 2. Curtis is doing his thing and i am in the booth laying down the 4 coats of primer. Primer dries and i sand and then start laying the base color. Curtis is finished with the milling and asks me to char the lumber. I don’t know why he wanted me to, but I did, and note i did whilst working in the booth. When i was torching the wood, Brandon came by and we chatted it up and he was really interested in the process and we talked about the history of it and so forth. I finished torching the lumber and went in the shop to sand it out, now completely covered in charcoal which is awesome when you’re painting a white table. I go back to the booth and by this time the sun is still overhead and blasting down heat on me and the table. I spray a coat and let it flash for 5 minutes then spray another. Pretty typical and not much time between coats. There is a chair in the booth and i sit down in between coats no big deal right? The day goes on and i lay down the pearl coats and eventually get into the clear. Attempting to spray clear outside, in direct sunlight, in 100 degree temperature with a 10 gallon compressor is hard work. I reduced the clear with high temp reducer to try to slow it down which helps, but there is still a little blush in places that drive me nuts. At home i use a product by DuPont called Blender that remelts the blush, of course i couldn’t get it in LA. As i’m spraying the clear Brandon comes back by the chat. He says “This really looks good…you may even redeem yourself”. I was feeling really good about the whole project until…

We went in to the loft for our “talks” and that’s when Curtis attacked me for being “lazy”, “amateur”, and any other adjective he could think of.  He was so hard at work and i just sit in a fucking chair doing stuff a high school kid could do.  That’s when i learned he was really trying to sabotage the project. This all came as a shock to me, i replied that i had no idea there was a problem and managed to keep my cool. I was genuinely upset. I’m not going to run around and wear myself out for no reason. I’m not going to start another project in the 5 minutes i have in between coats. The work was divided evenly and like i said before i had budgeted the time for me to do the whole project alone so there was no real need to rush. It’s taken me 33 years to learn how to slow down and do things right and nothing good can come out of rushing for the sake of rushing, believe me. At this point i knew Curtis wasn’t right in the head and since i had to sleep next to this guy at night and still had to work with him, i found it best not to engage with him. When i wouldn’t engage and kept my cool he turned on Freddy. So if it looks like i’m a pussy on TV that’s why.  We went home for the night and i was still confused. If there was a problem why didn’t you say something? oh well, it makes for good TV…i guess.

Build Day 3. Started the morning laying the pin stripe. It took awhile to get it perfectly straight. I don’t know what Curtis was doing and i didn’t care. I took the initiative and made the net. It didn’t turn out very well, but the clock was ticking and i didn’t have any help or input from my partner so it turned out the way it did. The top was warped, that happens sometimes when you’re laminating two pieces that large on saw horses. There was nothing we could’ve done at that point no matter what anyone said. Curtis was still cutting and manipulating the base, i don’t know how or why at this point, but i didn’t ask. We finished in the nick of time.

Judgement Day. The judges hated it which was weird because Brandon seemed intrigued the whole time. They hated the net, and i did too, but was stoked with the paint job i pulled off in that environment and the design of the base.

This whole build put an awful taste in my mouth which really sucked because i was really excited about everything. i felt like a bait dog for everyone’s entertainment. Much to my chagrin so much got lost to the edit, i actually did probably 70% of that build. That’s Hollywood folks. The chickens will come home to roost.