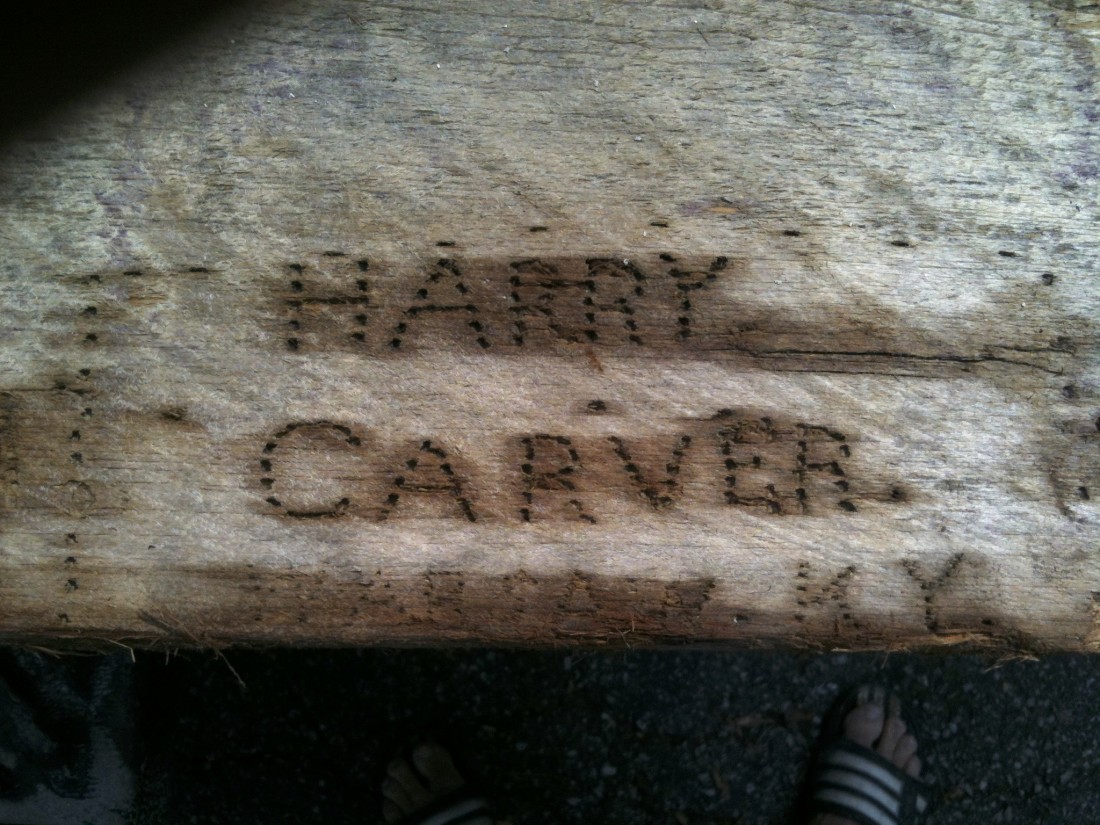 It was April of 2012 when I still had access to the demolition site at 18th and Main st. I was pulling out the last remaining 18″ x 12″ x 16′ poplar support timbers and as you’ll see in the photos it was no easy task (in total I pulled 6) We hooked a long chain to a dump truck and yanked each timber out of the rubble one by one onto my trailer.

I could only bring home two at a time since my truck and it’s 200,000 mile suspension was at it’s limit. Covered in whitewash, dirt and mortar I brought them back to the shop to be pressure washed and stored. Pressure washing makes it easier to see where the nails are and easier to finish in the end. One of the timbers had a lot of nails in it as I could tell even under all of the whitewash and the more I cleaned the more patterns started to reveal themselves. After finishing all 4 sides over the 16′ I saw full names, initials and even an indian head made from nail heads stamped into the wood, all of which had not been seen for 100 years. The date stamped with the names was April 1912 and I’m assuming that this was the final beam set into place during construction. The only full name I could make out was “Harry Carver – Warsaw, KY.” and immediately I turned to the internet. I went on white pages and looked up the name Carver in Warsaw, found a gentleman which was listed as in his 80’s and gave him a call. He answered and I explained that I was a carpenter in Louisville and while working on a demolition site I had found a board with the name Harry Carver from Warsaw and asked if he knew of him. He told me that Harry was his grandfather who was a carpenter that died of the Black Flu in the 1920’s. I told him that i’d like to cut a chunk of the wood with his grandfather’s name on it and give it to him, that I felt it should be with his family. I think he was a bit confused by the concept, maybe he thought he was being scammed or something, but I reassured him that I didn’t want any money and it was the right thing to do. I ended the conversation with a promise to drive it down to him whenever I get it finished.  A few hours later he called me back and said how much he’d really like to have that piece. I told him I wouldn’t dare give it to anyone else and that I would have it to him very soon.

At the shop I cut out a 18″ section of the beam with his name, sanded it and oiled it up to make a cube stool for him. Thankfully it didn’t cut through anyone else’s name in the process.

I drove about an hour to Warsaw and met Mr. Carver and his daughter at their home. They were salt of the earth people and very hospitable. I was ecstatic to give them back a piece of their family history exactly 100 years later.